started a topic about 1 month ago

Trust you are doing very well. Congratulations & thank you for creating a brilliant piece of protocol for audio.  It certainly sounds incredible.

I have placed the order via gentooplayer. The Dnegozio order is #1064.

My setup is following -

2. Target - gentooplayer on RPi4 B 2GB connect to valve based USB-SPDIF converter (SA9023 chip) from Abbas Audion and XMOS based Gustard U12 (ramsystem enabled)

5. LAN - dhcp n/w with Apple Airport extreme router (both RPi4 are connected  via the LAN cable). my n/w further has a custom dns server mapped to a Mikrotik router > virgin media broadband

1. Sometimes, when changing tracks (regardless of using audirvana, roon or spotify), the Target device disappears and music stops playing. I then have to reboot both host & target.

2. sometimes some noise from speakers can be heard (very rare), like when you have a loose electrical connection

4. mpd + upmpdcli is sometimes not visible in audirvana as upnp.

Suggestion required - do you recommend I continue using the gentooplayer RPi4 as host or shall I switch to a windows pc as LMS + Diretta Host for stable operation & better sound quality?

Please delete this post as I have received the activation and raised a ticket for the issues listed in this post.

1. In my experience Diretta Host is more stable with Gentooplayer than with Windows and will reconnect without rebooting. Windows needs to be restarted every time it shuts down.

3. Don't use ALSA drivers that are displayed a lot. ALSA will connect only if a Diretta Target is found. If Diretta Multi finds multiple Diretta Targets, each will be assigned an ALSA. 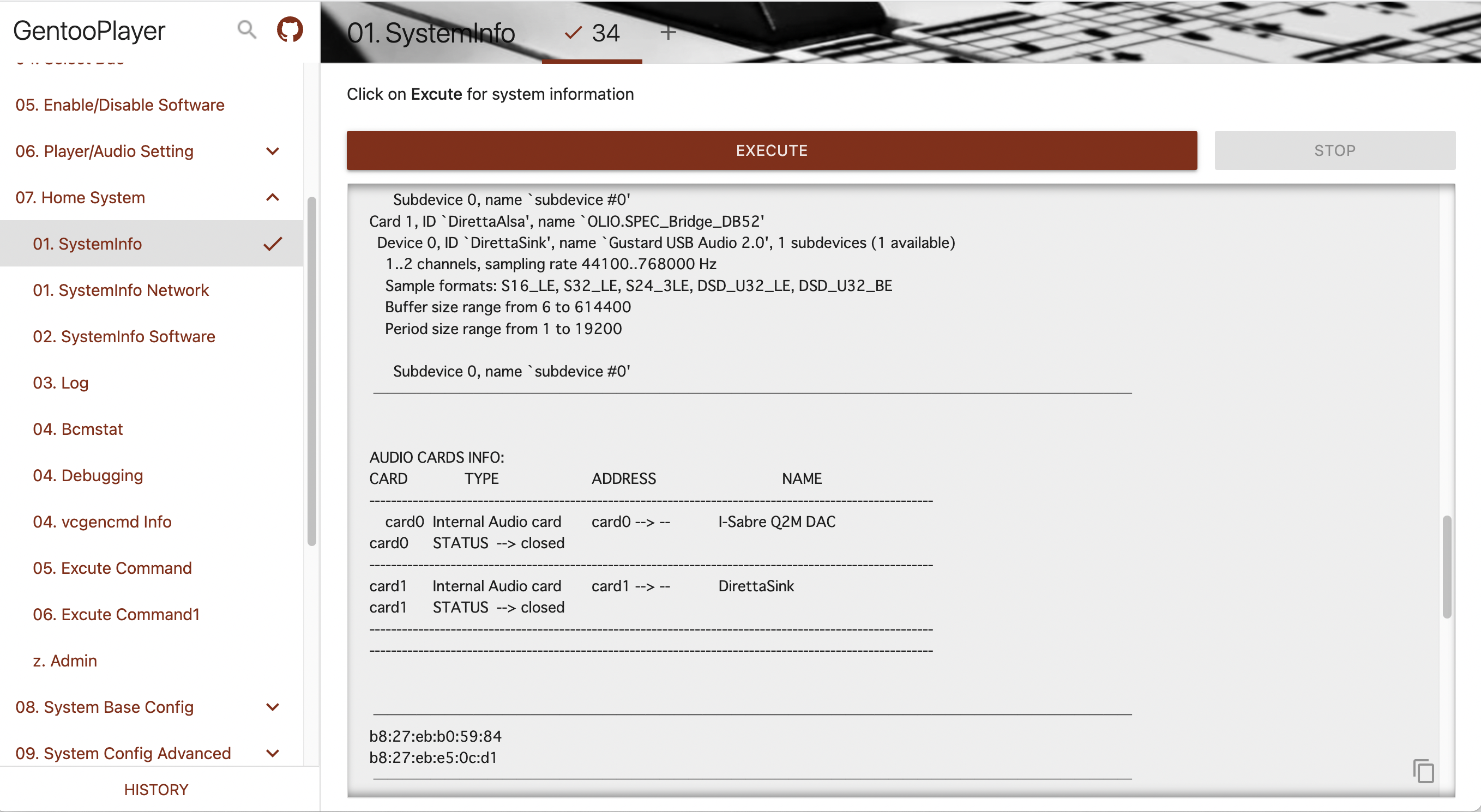 5. ALSA disappears if the connection and operation between Diretta Target and USB DAC (DCC) is unstable. This stabilizes with newer models of XMOS.

No problem using gentooplayer RPi4 for Diretta Host. Roon Bridge and Diretta Host are very stable. Just mpd upmpdcli is very unstable. In this case using nano pi mpd host in another thread is very stable. It is effective when using OpenHome, upnp.

Thanks for the guidance and highlighting areas to check further.

I agree Gentooplayer is very stable as a Host. The most stable audio device for audirvana is gmediarender as recommended by the author of Gentooplayer. I do not use mpd/upmdpcli.

In addition to the email sent to you yesterday, I have found the problem in my case is with the Target running on a RPi4(B) machine. As you have pointed out, I will further investigate whether the problem with the Target can be solved by replacing SA9023 based DDC with Gustard U12 which is XMOS (though it is not the latest model).

But, after running the Target on a powerful machine, and Host on other types of machine (RPI4, mac, windows etc.) with LAN connection either via ethernet or via wifi, no issues were found.

Tried Diretta Target with 3 different Intel based mac machines (from dual core 1.8 GHz processor to quad core 2.5 GHz) in UEFI mode using Diretta USB Bridge (2_104_5). Everything worked flawlessly without needing any restart either of the Target or of the Host machine at any point in time. Played several albums including radio without any interruption. There was no noise as reported earlier. There were no issues with playing files using DSP. No issues switching between Hosts or players (roon, audirvana, spotify) running on different computers on the network.

To rule out any hardware issue with my Target RPi4(B), I tried running Target on another RPI4(B). They both exhibited the same behaviour. Doesn't matter if Target runs within Gentooplayer or straight as Diretta USB Bridge (RPI4 UEFI mode). In fact, when running RPI4(B) as Diretta USB Bridge Target, it also gets quite hot as compared to Target running in Gentooplayer. With this observation, I am quite certain now that the Target needs a fairly powerful processor for a clean & stable operation, at least in my case as it appears.

So as long as the queen (Target) is stable :-), Hosts are stable. Hosts could run in Gentooplayer, Windows, connected via Ethernet or Wifi, players (ALSA) and the LMS running on two different machines, all without any problem.

My LAN infrastructure is quite robust especially with regards to connectivity / network range & streaming hi-res audio. After running different computers as Hosts & Target (on powerful machines) with different types of connectivity without any issue I can confirm that. Even after connecting the RPI4(B) Host  & RPI4(B) Target via good quality cat7 ethernet cables, there was no change in RPI4(B) Target's behaviour.

After trying everything, it can be concluded that the problem in my case is with the Target running on a RPI4(B) which is not powerful enough.

I am expecting the Windows headless PC to be delivered by Saturday. Will share my experiences further then. I intend to use this PC only as Target either with the Gentooplayer or without it (Diretta USB bridge).

First, I use Roon. So I will talk based on Roon Diretta.

My RasPi 3b+ or 4B Diretta Target is very stable. That's because the USB-DAC is new. The Gustard X16 XMOS XU216 is very good and uninterrupted. Diretta hangs if the USB isn't fast enough. In other words, USB-DAC CPU is not stable unless it is a new one. First change DDC to the latest one (Gustard U18). Old USB-DAC, DCC stop well. RasPi Target will be stable if you use a new one. The RasPi Gentooplayer Target APP also has no performance problems. We recommend OLIOSPEC Canarino Bridge DUB or SPEC RMP-UB1 for Target.

My Roon Diretta Host is below. Intel NUC8i7, NUC10i7, NUC11i7, Canarino fils 9 Core i9 12th, RasPi 3B+, 4B. Both have installed Gentooplayer and enabled Roon server and Diretta Host. Change thread mode from 5 to 1 in Diretta Host Config in GentooPlayer Settings 6. Diretta is very stable. Please try this.

Many thanks for taking the time to respond and for making Oliospec recommendations.

I have still not received my Intel NUC that I ordered - possibly delayed due to the ongoing Royal Mail strikes here in the UK.  You certainly have quite beefy Roon Diretta Host machines than I have.

I can confirm that the issue is indeed with my custom Bravo SA9023 DDC as you rightly pointed out that a good DDC / USB-DAC is key to Diretta stability. When I use my old XMOS based DDC, there are absolutely no issues using RP4(B) as a Target (either with Gentooplayer or straight as USB Bridge in UEFI mode).

Here are my observations / screenshots for your reference that explains the issues I have been encountering. As you can see, my Bravo DDC shows two different Target Devices in the ASLA driver or in Gentooplayer systeminfo as opposed to the XMOS DDC which only shows 1 Target Device. Regardless of whether I run the Target in Gentooplayer on RPI4(B) or Intel mac, or in Diretta USB Bridge mode on a standalone Intel mac (UEFI mode), there are two Target devices and possibly the cause for so may IRQ/s. Since RPI4(B) is not powerful enough, it becomes unstable, but not when using a power machine like a mac mini, though it does get a little warmer than it would with XMOS. 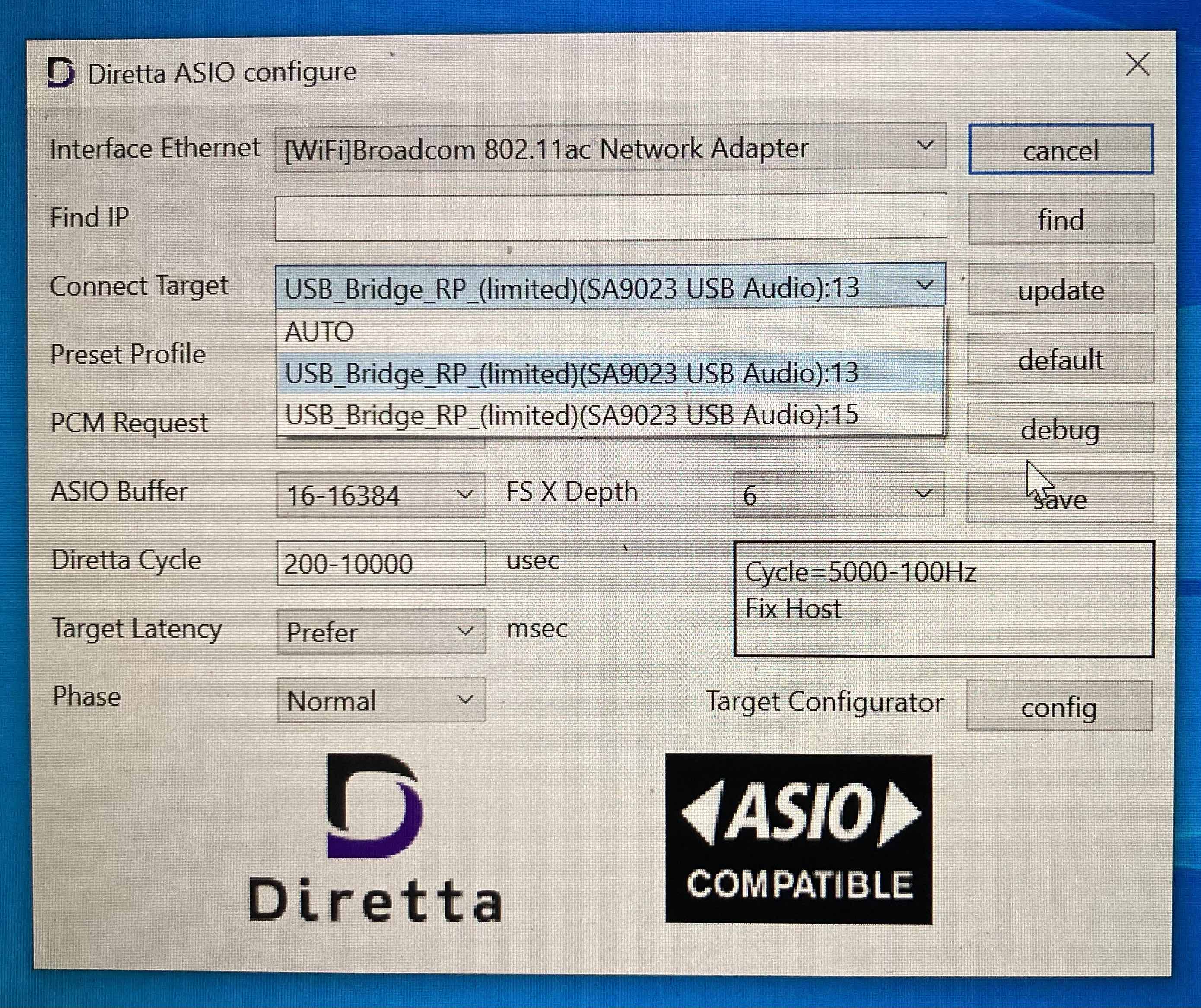 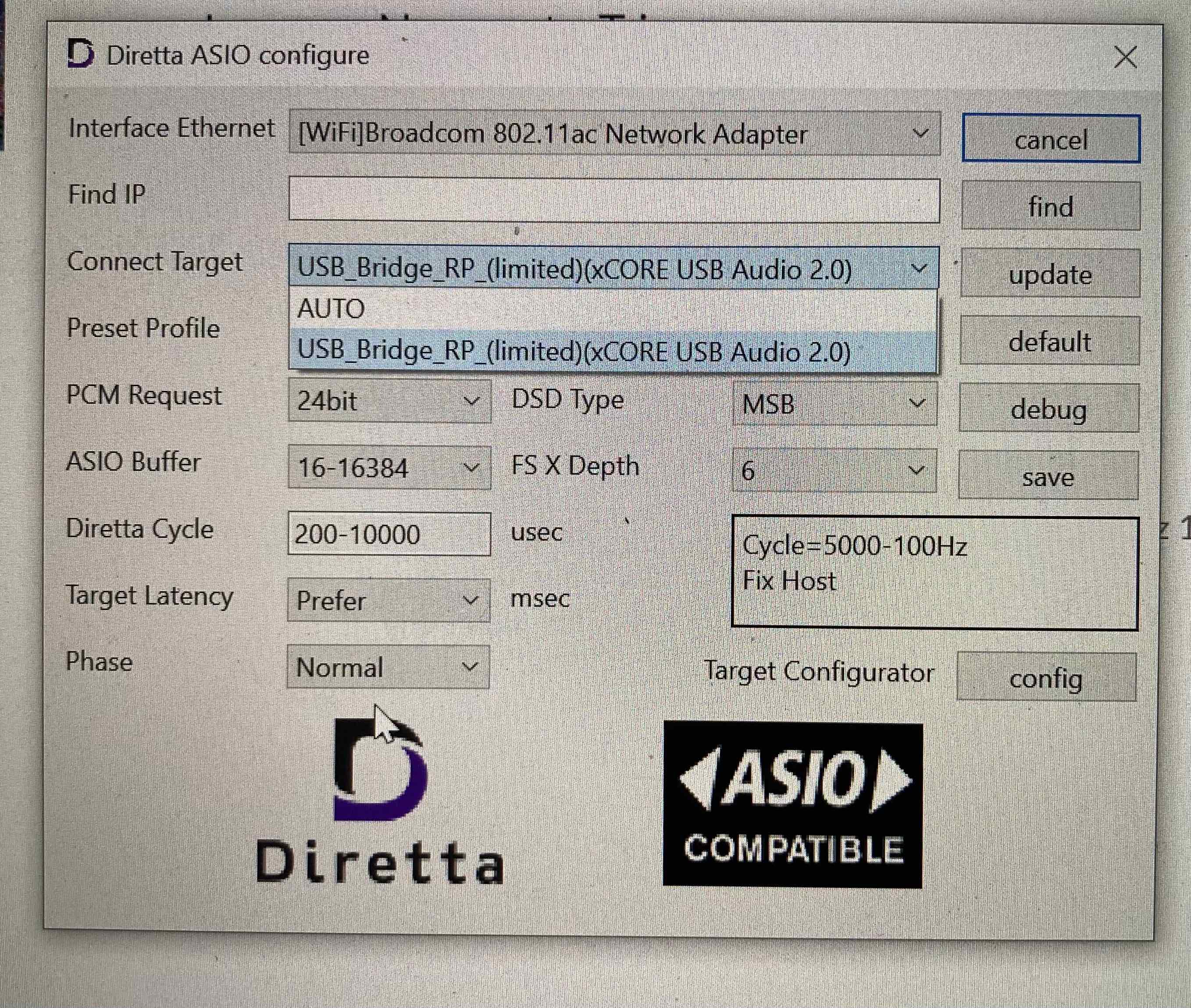 In this screenshot below, I am running Gentooplayer in RPI4(B) and Host enabled as Multi. If I enable Host as Single, I see only Card 0 device as Diretta Sink and the volume / output of the device drops by almost half. With Multi and Diretta Sink slected as Card 1 in 6.Player/Audio setting, it is stable. 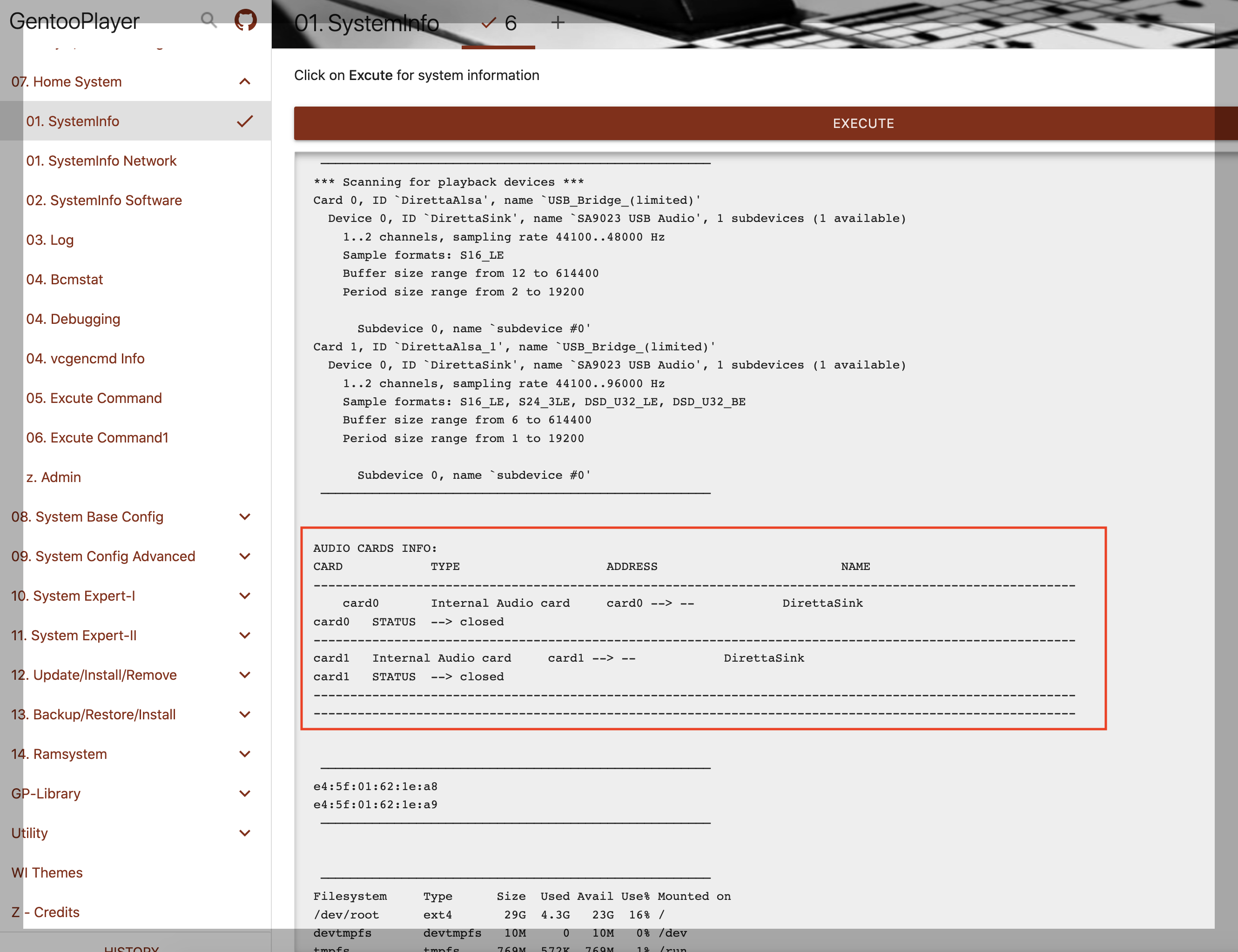 My dilemma is that after having tried a bunch of latest gen DDCs (including X16 / Mutech etc.) nothing sounds as open & natural as it does with my Bravo SA9023 based custom DDC so this is where my bottleneck is. Substituting this DDC with an XMOS based DDC + Diretta will not result in any sonic advantage and this whole exercise will be pointless.

Notwithstanding, I have't given up and this is what that works without any hiccups (both Roon & Audirvana tested) with my Bravo DDC.

#Target - on an Intel Mac Mini in UEFI Diretta USB Bridge mode. Diretta USB Bridge image is flashed to a SATA drive (MLC nand flash) connected to the mac mini via Firewire 800 interface. I have also used a good quality MLC nand flash USB drive with the mac and that is also very stable. Considering the operating temperature is high, I am anticipating these drives will at least have a relatively better life.

Running x86 version of Gentooplayer on an Intel Mac as Target with my Bravo based DDC exhibits same instability as it is in the case with RPI4(B). So my guess is that for Diretta to run with Gentooplayer, it needs an XMOS based DDC or at least the one which only shows 1 Target device in Alsa.

My further observation is that Diretta's sonic demeanour remains intact regardless of the combination of Host/PC/Drives/NW. So it is now really hard for me to listen to anything without it :-).

I will report once I have setup the Nuc when it arrives.

Additionally, for me the Thread Mode already shows as 1 by default.